Sorry it’s been a while since I’ve posted and published, but I’m back and about to talk about another famous gym.

California All Stars, originally established in San Diego, California, holds the most world titles out of any competitive cheer program in California. Since 2001 it has grown to house over 1000 athletes in 6 different locations. 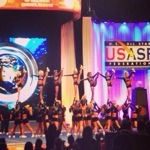 Time to discuss world renown gyms. I’ll be doing a series on gyms that are known thought the cheer world.

I’ll be starting the series off with Maryland Twisters from Glen Burnie, Maryland! The owner and president of this gym is Tara Cain. Between 2 locations they have 27 teams and over 500 athletes! Find out more about this wonderful gym in my podcast!

Thanks for your continued support and talk to you soon!

Talk about a cheer hangover! Worlds 2014 was jam-packed full of AMAZING talent and lots of upsets. The underdogs were there to take over this year! I just want to go over a few things in each division and then you can go listen to my podcast for a more detailed synopsis.

First off, HUGE congrats to the Lady Jags. They literally came out of nowhere, from not making the finals last year, to being in 4th in the semi-finals this year, to WINNING worlds. Also, props to Maryland Twisters F5 for competing in this division for the first time and taking home 3rd.

Speaking of competing in divisions for the first time and doing great, let’s talk about Orange. Not only was this first time competing Large All Girl at worlds, but they’ve done something that’s never happened before and that’s being the small, medium, and large champs consecutively. That is an amazing feat. On the flip side, this is the first time Senior Elite hasn’t globed at worlds since 2007.

3-peat was a trending topic on twitter after Smoed won their third gold medal in a row! Congrats to them and their coaches. They truly are an amazing team. Also, kudos to Louisiana Cheer Force for coming in third. To be 100% honest, I had no clue who they were until worlds! Awesome job for them!

A team that I’m very proud of is Maryland Twisters Reign. I mentioned them in my first podcast telling everyone to watch out for them because they are coming for a globe, and that’s exactly what they did. The medium coed division was a complete blood bath and I’m proud of them for finishing 3rd. It was a great competition for Twist and Shout Obsession who SLAYED the floor. However, it was a bitter worlds for Cali Black-ops who didn’t medal at this event, which is heartbreaking, seeing as they were the defending champions.

Small senior all-girl is probably one of the toughest divisions because there are SO MANY TEAMS competing for that title, and unfortunately only one can take it home, and those lucky, talented athletes were the Lady Lightning of ICE. Talk about a fierce elite and ending in squad r/o doubles. Way to come back from third place last year!

Large coed is the most entertaining division out of the senior divisions and Top Gun made sure we were entertained from their pyramid, to their dance, to their tumbling, to their baskets, EVERYTHING! Not only did they wow the crowd, but they wowed the judges with the highest score of the entire competition! AMAZING! They went back to back…retweet! In this division I think the team that shocked the most people was Cali Coed; not because of their lack of talent, but their lack of consistency throughout this season. They definitely hit a perfect routine at the right time and they had the third highest score of the competition! I’m so proud of them!

International teams are so hard to predict because you have to take into consideration that only the top 3 teams in each country make finals. With that being said Canada took over the IO5 division by taking the gold and silver and only leaving 1 spot to an team and that went to GymTyme pink which also happened to be GymTyme’s only medal. The Great Whites from Cheer Sport took home the gold and had the second highest score of the competition. Great job ladies!

The other international all girl division was opposite of the level 5 division in that it had two winners from the US and one from Canada. The Cheer Athletics Ladykatz redeemed themselves from last year when they went from defending champions to not even placing. Not to mention they have the most decorated cheerleader on that team. Ambrel Brannon has competed in every single worlds. She even competed when double teaming was allowed which means she’s competed a whopping 13 times at worlds. And it doesn’t end there, she has 13 medals, 6 of them which are gold.  Talk about a cheerlebrity!

I’m pretty sure Bangkok put on the best show with all their ridiculous pyramids. I’m so glad they came back this year and so glad they won. Now there is some kind of controversy (and it hasn’t been confirmed) that one of the US teams was wrongly judged and was supposed to win first. I’m still looking into it, however I think Bangkok won fair and square.

Kick kick full kick full! That’s a mouthful, but it’s also the most beautiful thing I’ve ever seen! Nobody can deny that Carly Manning has the best basket out there. Her bases toss her so high and she has all that body control to do 5 tricks in one basket! It wasn’t just Carly that helped Wildcats win the IOC5 division, but it was definitely a highlight of the routine. And then you have SOT Purple Reign who had to stop their routine because of an ACL injury, but they figured out their routine, fixed what they needed to fix and came in second place. That’s such an inspiring story!

There it is. A quick rundown of worlds. Go listen to my podcast where I will thoroughly analyze Worlds 2014.

Some other topics I will be touching on are:

Thank you for the continued support! Talk to you soon!

4 out of 5 dentists recommend this WordPress.com site